(Geneseo, IL) Hammond-Henry Hospital (HHH) has chosen two outstanding employees to win recognition awards.   Katy Loibl, R.N. has been named as the latest DAISY award winner. Leigh Appleton, MLT has been named Sunflower award winner.  Both awards recognize outstanding performance as healthcare workers, however, the DAISY award is specific to nurses while the Sunflower focuses on other caregiver roles.  Nominations for both come from patients or their families and the winners are chosen by a committee of both hospital management and Foundation representatives.

Loibl works as a Home Health nurse and has been with the hospital since 2010. Katy was nominated by a patient and his family.  She began seeing this patient after he sustained multiple serious injuries after a farming accident.   With her persistence and determination, she made sure he received adequate care.  The patient was diligent with her recommendations and attributes his recovery to her compassion, flexibility and understanding. 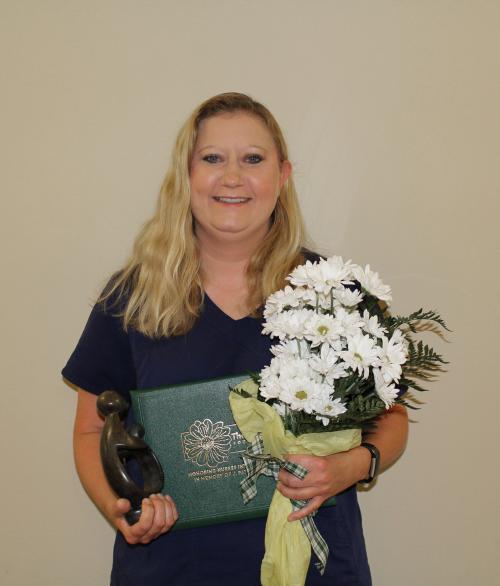 Appleton, a medical laboratory technician in the HHH laboratory has been with HHH since 2003.  Leigh was nominated for her patience, empathy and kindness.  During a recent visit to the lab a patient became frightened and confused.  The patient’s caregiver was impressed with Leigh’s calm and pleasant approach, stating, “I wish there were more like her.” 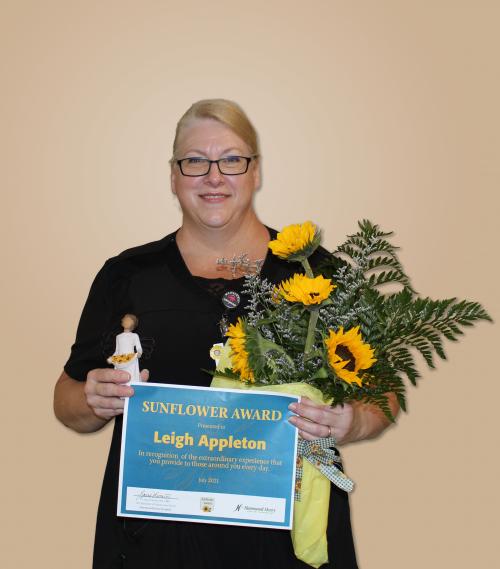 Celebrations were held in both employees’ honor.  Each was awarded a statue,  pin, a bouquet of flowers, cinnamon rolls (requested as tradition by the family of the DAISY program) and cookies. There will also be recognition in their departments for the next 6 months.

The DAISY (Diseases Attacking the Immune SYstem) Award is an international recognition program that honors and celebrates the skillful, compassionate care nurses provide every day. The DAISY Foundation was established by the family of J. Patrick Barnes after he died from complications of the auto-immune disease ITP in 1999. During his hospitalization, they deeply appreciated the care and compassion shown to Patrick and his entire family. When he died, they felt compelled to say “thank you” to nurses in a very public way. Hammond-Henry Hospital’s DAISY award program is sponsored by the Hammond-Henry Hospital Foundation and is chosen semi-annually. For more details of this program or to nominate a nurse, visit our website at www.hammondhenry.com.

The Sunflower award is modeled after the DAISY award, but is an internal recognition program as opposed to a national organization.  Those on the DAISY committee noticed a need to recognize other caregivers throughout the hospital and instituted the Sunflower award to give the community an opportunity to reward those that impact their hospital experience in a positive way.